Sommer Ray (born September 15, 1996) is a famous bikini model, athlete, and Social Media superstar. From the early age of 15, she was dedicated to gym and fitness. Her biggest popularity comes from posting fitness and exercise videos on Instagram and YouTube.

She has over 25 million followers on Instagram and over 1.8 million subscribers on YouTube. Her content mainly contains gym videos, fitness regimes, funny collaborations, and personal Q and A. She is also a member of the famous YouTubers named “Clout Gang”. Discover Sommer ray Age, Height, Weight, Relationship, Net worth, and Full Bio down below. 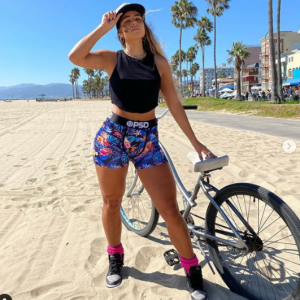 Why is Sommer Ray famous? Sommer Ray is a fitness and bikini model from Denver, Colorado. She is a massive gym and fitness fanatic. It is known she was trained by her father from the early age of 15.  She is famous for showing her fitness skill and she is incredibly fit and strong body on social media. She was also famous when in 2015, she won two trophies at NPC Colorado Championship as a bikini athlete. In the NPC USA championship, She came 16th same year.  She not only shares or fitness videos but also posts comedic videos collaborating with other YouTubers. She has over 25 million followers on Instagram and over 1.8 million subscribers on YouTube whom she shares her fitness video. “Q & Awith Sommer Ray”, “Getting ready with Sommer Ray”, “Life of Sommer Ray”, etc are some of the famous videos on her social media channel. Her first video was published in July 2017 named “My First Vlog Ever”.  She has also appeared on the MTV show Wild N’Out.

Her career took off when in 2016; she was named “Lovely Lady of the Day” by a sports illustrator. Her popularity rose even more when she was regularly seen with Entrepreneur Tai Lopez in her vine and fitness videos. She is a member of a famous YouTubers Group named “Clout Gang”. She also has her own merchandise brand name Sommer Ray Shop where her fans can buy her merchandise.

How tall is Sommer Ray? Sommer stands at a height of 5 feet 6 inches and weighs about 56 kg. She has green color eyes and her hair color is blonde. Her zodiac sign is Virgo.

She is really beautiful and has an incredible fit body. She looks active and focused on what she is doing. But she also has a good sense of humor and she is involved in funny collaborations with her Group Clout Gang.

Who is Sommer ray currently dating? She is currently dating fellow influencer Taylor Holder. But before that, she was involved in a romantic relationship with pop and hip-hop star Machine Gun Kelly. She got into a major controversy when it was announced she was dating a fellow member of Clout Gang “Ricegumm” but the audience dismissed the relationship addressing they were pretending to gain more followers.  Reportedly she also dated actor Max Ehrich in 2017.

In her family members, she was really close to her dad who trained her in her younger days. He was also a bodybuilder. He died when she was only in her teens. So there is not much known about her father. Her mother Shanon ray is also a social media influencer with more than 750,000 followers. She also has three siblings named Savanna, Skylyn, and Bronson.

What is Sommer Ray’s net worth? Sommer Ray has a mass following with 25 million on Instagram and over 1.8 million on YouTube, She also has her own merchandise. Her source of income seems to be brand deals, paid sponsorship, and sales of her merchandise line. In 2020, it is believed her approximate net worth to be $8 million.

Did Sommer ray date Ricegumm? Sommer Ray and Ricegumm both are members of YouTubers group Clout Gang. In 2017, rumors spread that  Sommer and Ricegumm were started dating. But fans were furious when they realized that the rumor was fake just to hype up the group and channel. The pair did not clear anything but after some time it was again addressed that they eventually broke up. Both were severely criticized for fake rumors.

Sommer has also come under criticizing for showing her body to earn money. Many people address her to not be involved in any hard work and she has an easy source of income. Sommer has always replied she is not ashamed of what she does.

She also came under fire when her video editor expressed her discomfort about not getting paid. Later they both resolve the issue themselves.