Who is Brittney Griner?

Brittney Yevette Griner, professionally known as Brittney Griner, is a famous basketball player in the USA. She is considered one of the country’s finest basketball centers of all time. Griner’s achievements are very high to articulate at once. She is also an inspiration to many women trying to make it big in the male-dominated society. The player has been associated with the Women’s National Basketball Association, Russian Premier League, and EuroLeague Women.

Her personal life has gone through several ups and downs. For her international prominence, nothing was hidden from the public. Griner has also represented the national team of the USA. In 2009, she received the title of WBCA High School Player of the Year. In the same year, the player got selected to the McDonald’s All-American team. She won the Big 12 Defensive Player of the Year award four times. In 2014, the basketball center became the WNBA champion with her team Phoenix Mercury.

She was chosen for the WNBA All-Star game seven times. Griner was the two-time WNBA scoring champion in 2017 and 2019. She also became the WNBA blocks leader eight times. In 2014 and 2015, the player won the WNBA Defensive Player of the Year Award. She also became a three-time Russian National League champion from 2015 to 2017.

What are the career highlights of Brittney Griner?

Brittney Griner is a Women’s National Basketball Association star. She has been playing professionally since 2013. Following her success in high school leagues, the player willingly joined the Baylor bears women’s basketball team at Baylor University. In 2009, she scored 34 points and 13 rebounds. Her team won the NCAA championship in 2012. Griner scored 26 points, 13 rebounds, and five blocks. In 2013, she was drafted by the Phoenix Mercury for her debut Women’s National Basketball Association season. But due to a knee injury, she could not perform well during the season.

In the following season, Griner had an average of 15.6 points, 8.0 rebounds, and 3.7 blocks in each match. Phoenix Mercury became the champion of that season. The player was suspended for seven games in the 2015 season of WNBA due to some personal issues. But her performance in the last matches was exceptional. Griner accordingly performed well in the later seasons too. Apart from the USA, she played in the Women’s Chinese Basketball Association and Russian Premier League. While representing the national team of the USA, the player won the gold medal in 2016 Rio de Janeiro and the 2020 Tokyo Olympics. The team also won two world cups in 2014 and 2018.

Where did Brittney Griner study? 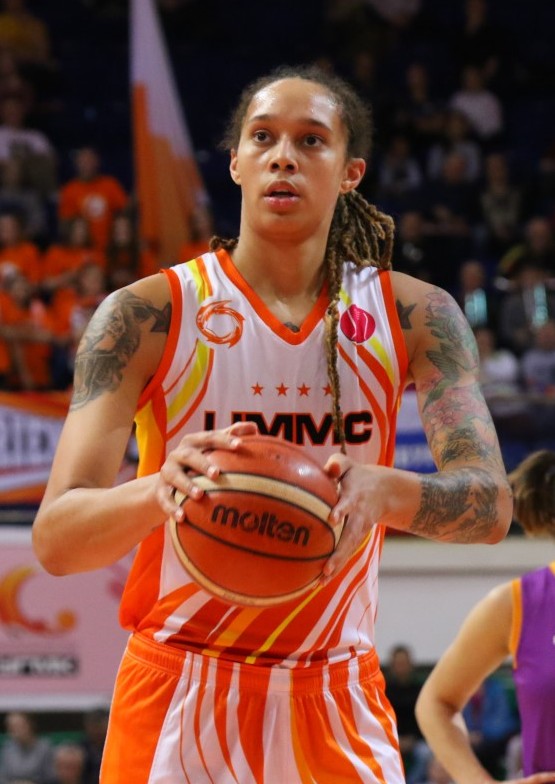 Brittney Griner is openly lesbian. She married her fellow basketball player Glory Johnson in 2015. But they separated in 2016 due to domestic violence.

What is Brittney Griner’s Net worth

Brittney Griner’s net worth is $3 Million.